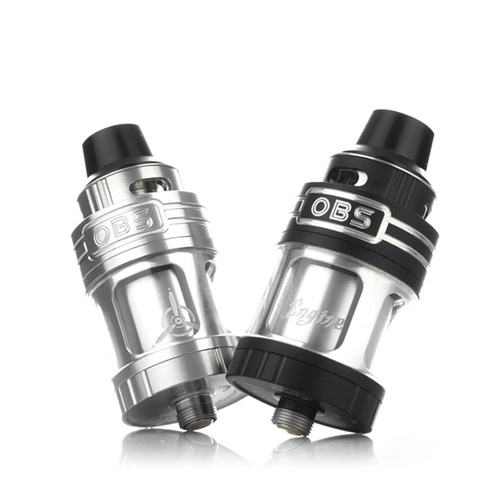 The OBS Engine Rebuildable Tank Atomizer is nice looking RTA with a large tank. Many vapers have been raving about this RTA in e-cigarette reviews since it was released last year. 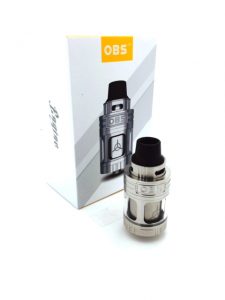 The OBS Engine RTA is made of stainless steel and quartz glass. It has a dimension of 54.5mm by 25mm and weighs 42g. The standout feature of this RTA is that it has a 5.2ml tank. It is rare to find an RTA with a capacity to hold such an enormous amount of e-juice. The Engine RTA has twice the tank capacity of most RTAs on the market. The tank has a top side filling design. You simply need to pop up the top cap to access the fill holes. The tank is incredibly leak proof.

The OBS Engine RTA is designed uniquely with a large 17mm coil deck at the bottom part of the atty. This makes it easy to access the deck when you want to work on your coils. You simply need to unscrew the top cap to get to the coil deck. The Engine RTA has a velocity-style two post deck. It is incredibly easy to fix the coil and wick it on this coil deck. The package includes a set of pre-built coils made of twisted wire. There is also a pack of organic Japanese cotton in there. You will find four 4mm wicking ports below the deck which allow you to put the edges of your cotton in the small reservoir below for proper saturation.

The OBS Engine RTA does not get overheated when you use it. The coil deck is isolated from the tank. This leads to a 30 percent reduction in temperature when you are using the atty.

On top of the Engine RTA, you will find a POM Delrin drip tip. This is the only part of this atomizer that is plastic. The drip tip is removable, and you can replace it with any standard 510 drip tip. At the bottom of the atty, you will find a 24k gold-plated 510 connection pin for attaching it to your mod.

The OBS Engine RTA comes with an adjustable quad top airflow design. This results in great flavor and massive clouds. Of course, the richness of the flavor you get while vaping with this atty depends on other factors like the type of coils and wicking material you are using as well as how large you have set the air holes. For maximum flavor, you don’t want to leave the air holes fully open. However, if you are after the clouds, then, by all means, leave the airflow wide open.

Overall, the OBS Engine RTA is a compact atty. It feels solid and looks simply gorgeous. This RTA would come in handy for vapers who do not like to open up their tank frequently to refill thanks to its capacity to hold a large store of e-liquid. Also, with its side filling hole, you do not need to take the tank apart to add more e-juice.

This is an excellent atomizer for those who enjoy rebuilding. It comes with all the best features and performs just as you’d expect. The OBS Engine RTA is available on the Volcano E-Cigs online store for only $19.99. This atty is also available on many other vaping stores for about the same price. It comes in black and stainless steel color. The Engine RTA comes in a simple with and yellow box with a lot of information about the product as well as an authenticity code. You will also find a replacement quartz glass and a set of O-rings in the box.